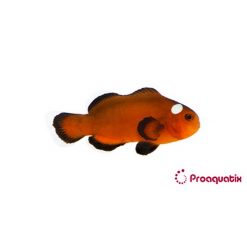 The Mocha Domino Clownfish is the result of selectively breeding Mocha Ocellaris to have little or no stripes.  A Mocha Domino has at least one white dot on an otherwise caramel colored ocellaris.

The Mocha Domino Ocellaris Clownfish is a very popular fish and will get along with other Clownfish in the same aquarium, depending on the size of the aquarium. They do extremely well in the aquarium and are very peaceful.

$35.99
Add to cart
× product(s) added to cart → ×
Join Waitlist We will inform you when the product is back in stock. Please leave your valid email address below.