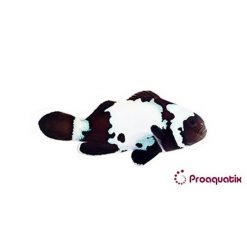 The Black Snowflake Clownfish is a variation of the normal Snowflake with a black body.  It has exaggerated barring with unique patterns.  Snowflakes have three separate and distinct white bands.

This Clownfish is a very popular fish and will get along with other Clownfish in the same aquarium, depending on the size of the aquarium. It is also one of the first marine aquarium fish to be bred successfully in captivity. They do extremely well in the aquarium and are very peaceful.

The Snowflake Ocellaris Clownfish does not need an Anemone to survive, but will accept many different Anemones as its host, including corals. Their favorite Anemones to call home are the Carpet Anemones Stichodactyla Gigantea or the Magnificent Anemone Heteractis Magnifica.

$20.99
Add to cart
× product(s) added to cart → ×
Join Waitlist We will inform you when the product is back in stock. Please leave your valid email address below.