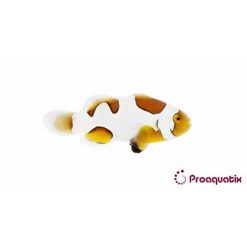 The Extreme Picasso Clownfish is a highly sought after variant of the Percula Clownfish. The Picasso occurs naturally in the Solomon Islands and Papua New Guinea however it is exceptionally rare.These beautiful fish exhibit extra white mainly on their center stripe. Each individual fish is unique. These fish are graded on the amount of white present, the oddness of the striping, and the rarity of the markings. The Picasso Clownfish may be radically marked on one side and merely have an extra blob of white on the other.  The black pigment will develop as the fish ages until maturity.

$38.99
Add to cart
× product(s) added to cart → ×
Join Waitlist We will inform you when the product is back in stock. Please leave your valid email address below.