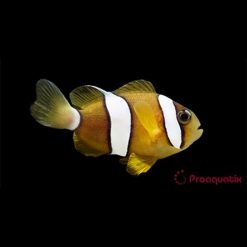 The Proaquatix Pearl Eye Clarki Clownfish has a distinct pearl eye with white dots on the upper eye.  It is yellow, black, and tan.  Caudal fins can be white or yellow.  The number of stripes varies from two to three.

They do extremely well in the aquarium and are very peaceful. These fish will accept most fish foods and are perfect for reef tanks. More than one can be kept in the same aquarium.

$19.99
Read more
× product(s) added to cart → ×
Join Waitlist We will inform you when the product is back in stock. Please leave your valid email address below.